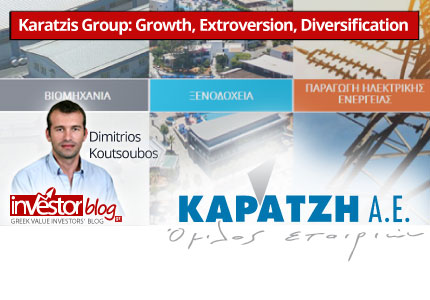 In Athinon Avenue—where Athens Stock Exchange is located—, prices have gone up this year, bringing even the small and micro cap stocks higher. Thus, finding profit making and growth firms in low prices has become difficult now, despite intense research. Only very few, abandoned by investors and little known stocks, meet those criteria. Occasionally, this happens when the growth of such stocks lack the growth of their fundamental figures, as retail investors do not recheck and evaluate. Karatzis SA (KARTZ), seems to be one of them.

Revenue, Equity and Net Income of Karatzis during the previous 10 years.

As seen in the graph above, during the Greek crisis, this Cretan group, by being extrovert, has managed to increase its basic figures, like sales, equity and net income. Thus equity, according H1 2017 data, is at €114 million today, compared to €68 million a decade earlier, at the end of 2017. Moreover, sales have increased from €61 million in 2007, to €78 million in 2017. The increase is attributed to the good performance of the industrial segment (netting materials), to the growing figures of  the hospitality segment (Nana Beach Hotel), and the new business activity in PV that has contributed a lot, especially from 2012 and after. 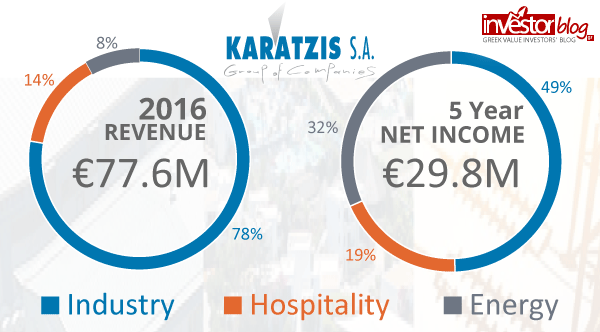 The graph above presents sales during 2016, the sum of profits during the previous 5 years, and the contribution of each segment. You may notice,  that in spite of industrial’s segment sales contribution of 78%, half of the profits have been generated by the other two segments. It is their nature, particularly in PV, to generate low revenue but high margins. Therefore, the value of the company and the importance of the other two sectors may be initially underrated by just examining revenue.

Regarding its industrial operations, the company has a leading position in netting materials, with factories in Greece and Germany, having a total annual production capacity of 40,000 tons. Some of its products are raschel bags on rolls for packaging of onions and potatoes (No1 globally), netwrap products (No2 globally), elastic netting for meat & poultry (No1 in Greece), shade netting for greenhouses (No1 in Europe) and Christmas tree netting (No1 globally). High dependence on polyethylene price, determined by oil prices, is a characteristic of this business.

The company cites that an increase of 5% in polyethylene price would lead to an increase of 2.95% in the industrial output cost. To make the importance of this factor understandable, we note that when the oil price surged in 2007, the group was led to a loss of $3.5 million, until transferring a part of the cost. Overcoming this difficulty in past is a sign of durability. Today, the group seems to be even more durable, having a stronger balance sheet and less dependence, due to operating in new segments.

In hospitality, Karatzis operates the 5-star “Nana Beach” hotel, having managed to substantially increase its revenue. Alongside, it has  a new 5-star hotel under construction, “Nana Princess“, which is expected to be operative in 2018 season. After this important investment, the revenue of the segment could approximate €20 million per year.

Moreover, very recently, Karatzis announced, the sale of Creta Polaris (plot) to the German TUI, without disclosing the amount. This development may serve the company’s investment plans.

In energy, the group has a PV portfolio of 15.5 MW, which in recent years, contributes revenues of about €6 million per year, and has managed to produce €10 million of accumulative profit for the previous 6 years.

Furthermore, by this year, Karatzis Group has started operating in supply of electricity, through its subsidiary KEN. In H1 2017 it has already reported €2.5 million of sales. It is weird that the size of Karatzis is too small, compared to other greek companies which have entered this market (e.g. Mytilineos). However, a “trump card” of Karatzis may be the characteristics of localism in the cretan market. The group hopes to gain an essential share in Crete.

As you may have understood, Karatzis Group, besides being export-oriented, is characterized by diversification, with energy and hospitality segments gaining increased weight in the previous few years. In addition, the group has been profitable and growing in all of its segments. A lot of coincidences have to erupt to hurt all of them. Combining this fact with low net debt, we come across a “tough nut”.

On the other side, this multi-split, despite meaning safety, is a little bit worrisome as the three operating segments do not have anything in common to create synergies, like in other vertically integrated groups. The Greeks use to say, “ή παπάς παπάς ή ζευγάς ζευγάς (papas papas or zevgas zevgas)”, meaning that you can not be a priest and a farmer at the same time. Lack of focus might baffle management and hit its efficiency. Development in the new sectors probably was a natural choice towards growth, as the main sector matured and reached leading shares.

Stock of Karatzis during the previous 5 years. (Source: Yahoo Finance)

So, what is the price an investor should pay for getting all those “goodies”? We would not expect a low price, since the company is growing and is one of most durable in the micro caps. Nonetheless, with the stock at €5.51, the market cap comes in at €81 million, 29% lower of the book value (€114 million).

At the same time, according 2016 earnings, the P/E is a single-digit 9.6x. By being more conservative and using the average profitability of the previous 5 years, the multiple comes in at 13.6x. That still low, in spite of lower weighting of a financially good 2016, which probably will be followed by a strong 2017.

According 2016 revenue (€77.6 million), P/Sales comes in at 1.04x. Nothing very undervalued revealed here, but as we discussed before, the nature of the two supplementary segments does not help sales, despite the fact that they provide half of the earnings. Thus, P/Sales is “unfair” for the group, hiding its undervaluation. This may change soon, as KEN (supply of electricity) will start growing its revenue.

In few words, Karatzis Group is an interesting choice, since all of its three segments remain profitable and growing during the previous few years. In industry it is a leader in netting materials, in hospitality it expands through the new under construction Nana Princess, while in energy and its stable flows, it is adding the promising, especially for Crete, supply of electricity operations. New investments are reasonable, as net debt is low. It also worth citing, that both hospitality and industrial segment are export-oriented. Growth, extroversion, diversification and the strong balance sheet, offer safety to the group.

Despite high diversification, there are some risks that could temporary punch its metrics, such as an oil price surge, or a new global crisis that would hit vulnerable tourism. In addition, somebody could be skeptical of the multi-split operations.

In any case, I think that low valuation compensate for those risks, emerging Karatzis as one of the cheapest quality firms. It is hard to find companies with such characteristics and with single-digit P/E,  in the Athens Stock Exchange.

Of course, as we have said many times, an investor should make his own investigation and take his own decisions, without forgetting the importance of keeping a well diversified portfolio. I consider that Karatzis Group worth to be examined by value investors.

*This is a translation of the greek language original article that was published in Ocober 17th, 2017.