Equities: The Power of Predicting What, Ignoring When 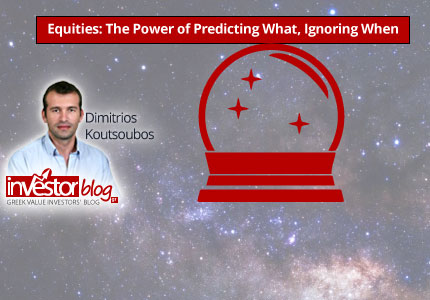 Some examples follow: “A heat wave will come”, “We will have elections”, “An earthquake will hit”

The more open the time window, the more certain the success of your prediction. In the following 10 years, earthquakes, elections and heat-waves will come. The same goes for the stock market and the economy. During a crisis, like the one we experienced in 2008, if you declared that “we will get over the crisis and the stocks will see higher prices in the future”, you could feel proud for your prophetic words.

The obvious counterargument that would automatically make you seem ridiculous takes less than two words in Greek. “Χαίρω Πολύ” [hero poli = I am glad , When sarcastically used, it has the meaning that you say the obvious]. Such a prediction sounds just non-sensical and funny without defining the time. However, as funny it seems, so lucrative it can be for those who are able to identify its importance and exploit it.

It is mysterious that while this kind of  “prophecy” is easy and with high value, as the title of the article suggests, very few may redeem it. The reason is the human nature of fear, greed, myopia, arrogance and impatience.

So, the 2008 prophecy that despite the crash, stocks will see higher prices, was confirmed. The very few that took advantage of it by buying low, disinterested about inticating the bottom and the time, were the winners. Those who feared, those who attempted specific projections and those who lost their patience, did not enjoy the fruits of the prophecy.

Value investing success is attributed to the extreme power behind the cultivation of this temperament that aims to neutralize those human weaknesses. Since this is not something easy, very few are able to follow. It is very interesting to watch this video of Warren Buffett talking, years before becoming a billionaire.

Many believe that value investing will become very difficult in the future, due to AI (artificial intelligence) developments that will allow a better than human intrinsic value estimation. My belief is that this is not going to happen, because people are mainly interested for the short-term outcomes. If they ever made those robots functioning with long-term judgement, they could not stand their choices. They would want to break them the following day. They would worship and maintain those robots that perform well at present, by following the trend, the bubbles and the panics. Thus, I consider that distortions will continue to exist, providing fertile ground for value investors.

The tendency of humans to short-term thinking is the large moat that protects value investing and the long-term investor, offering him superior and safer performance that is not easy to get downgraded by the investing competition.

Not the clever are the winners, but those who follow and cultivate the right temperament. Those who know, can stand and choose to act as patient prophets who don’t define the time.

One comment on “Equities: The Power of Predicting What, Ignoring When”