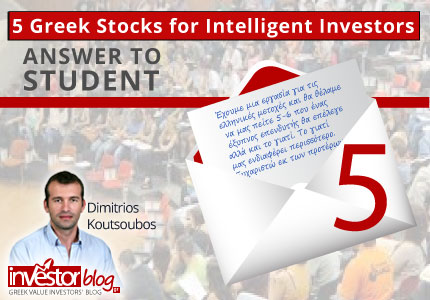 Dear Investorblog’s friends, I received the above message from a student. Like in similar cases, I prefer to answer in public, so that more of you can reach these thoughts, and for the opportunity of discussion.

We have given a homework about Greek stocks and we would like you to tell us 5-6 that an intelligent investor would choose and why. “Why” is more important for us. Thank you in advance.

I would not say that smarts win in the stock market, as a lot of great investors have admitted. So much balance and intelligence is needed, so that somebody can understand that what wins is patience, courage, decisiveness, faith, confidence, acting against the crowd, but with the humility of accepting the limits of knowledge. Acknowledgment of the endless unknown is critical in the investing process.

Initially, I find it positive that you focus on “why” and less to selections. I would also like to encourage you to make your own research and avoid easy ready stuff. Times are changing and valuable to you won’t be just the framing of a piece of paper, but knowledge and experiences, especially through homeworks and actions that bring you closer to the real world of economics. One such action is attending of AGM’s organized by Hellenic Investors’ Association. Having those in mind, I will cite 6 stocks that currently consist the larger part of my portfolio (about 40% of all equities)

I will make a brief explanation of the reasoning for holding them, so that you can have a piece of how a long term investor as me thinks. Of course, in your turn you may conclude to your own selections, and probably you will need to further research, so that you can be academically sufficient and present details and data, according the guidance you have received. It wouldn’t be a bad idea to talk to other investors that implement a different than Value Investing philosophy, the method I follow, so that you can have different views and ideas.

(FFGRP) FF Group: FF Group is well known in Greece, but most here do not know that the largest part of its operations take place abroad. Concerns about cash flows, that fall short of profits, has drove the stock to such low levels, that loss making enterprises would trade. Having a growing revenue of €1.3 billion and a profitability of around €200 million, the market capitalization of €1.27 billion (€19 per share) seems like a joke. If nothing suspicious happens in accounting or the model of collecting cash, and the cash flow issue is infrequent and mainly due to growth, then market capitalization could be at least double than current. In addition, the company is profitable and growing, so its intrinsic value grows while time passing. What really scares is that FF is not a small cap, where markets fail often. It is a stock on the surface, so an investor should respect market’s opinion, that probably is aware of something else and has not misunderstood the stock. I think that only the event of an accounting scandal or something destructive for the company could make such an investment ending in loss.

(NEWS) Newsphone: It is a small company known for operating 11880 telephone support service. During the previous few years, revenue has been shrinking due to the end of public contracts. So, revenue has dropped from €70 million in 2009 to €28 million today. Also, current revenue is at risk, because internet is negatively affecting telephone support services. Furthermore, there is legal action about receivables of €22 million with the greek state. So, why an intelligent investor should choose this stock? All the above and the fact that the stock in not so famous, have led its valuation very low, to €7.3 million. Furthermore, the company has developed services, such as Vrisko.gr, that are growing and counterbalance the shrinking of its traditional services. Another positive fact, is that it is eliminating its debt. Thus, if earnings fluctuate between €1-2 million, even if there is no growth, a fair value could be in the range of €10-20 million (€0.36 – €0.54 per share), much higher than the current market capitalization. I estimate that this is not a promising enterprise that will grow its intrinsic value. However, I expect to have an one-off gain, when the stock will be coming closer to a fair price.

(ASTAK) Alpha Astika Akinita: It is impressive here that with €89 million an investor can buy a firm with its real estate value at €66 million, its cash of €66 million and with no debt. So, giving a little bit more than its cash you have the real estate value almost for free. Real estate is not one of the efficient businesses, so I do not believe in its good prospects, but again I expect an one-off gain, when the stock will be coming closer to its intrinsic value. Investors avoid ASTAK because of the low transaction volume. But, according my strategy, there is nothing better than finding something so cheap, just because it is away from investors’ awareness. This is the best reason for a stock to be cheap. Think of it!

(EYAPS) Thessaloniki Water Supply & Sewerage: This is a monopoly and utility company, so it has stable financials. Its net income was around €13 million per year, and its cash is €71 million. So, a market capitalization of €173 million seems very attractive for such a stable company. Of course, there are a lot of risks since it is controlled by the state, which can hurt shareholders in many possible ways.

(ANDRO) Alpha Trust Andromeda Investment Trust: As a choice it has the advantages of funds compared to specific stocks. Namely, diversification, professional management, easy access. Its disadvantages are about greek exposure and the discount/premium factor. A trump for Andromeda is that it has a history of great performance, and a large discount. The internal value is at €28.24, 26% less than the market price of €20.2.

In order you to understand the way of thinking and the frame I discuss the above, I suggest you to watch this video of my speech at University of Piraeus during a presentation of the Hellenic Investors’ Association. (English Subtitles)

Thank you very much for your interest. I wish you good luck for your homework and your career.