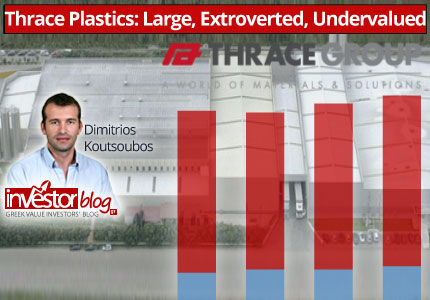 People not keen on the greek stock market, namely most Greeks, and the Greek micro-investors who are mostly used to buy only banks, both think that the greek stock  market has been totally destroyed. They probably ignore that a small group of greek companies which have turned their attention abroad, are growing and produce more and more earnings. They do global sales either by choice, or due to their nature. This is a fortunate fact for their employees, the greek economy, the society and state’s income. But unfortunately for value hunters, this “fishing ground” is getting better and better known among investors, so larger extroverted companies are no longer cheap. Now, undervalued and extorverted are only found in Small Caps. It is very interesting that Thrace Plastics (PLAT), which is somewhat larger -especially for the greek stock market standards-, has ratios that show undervaluation.

Some basic Funadamentals for Thrace Plastics

The graph above shows the uptrend of Sales and Earnings during the previous few years. Sales have been increased from €268 Million in 2011, to €289 Million in 2015. Respectively, Net Income has increased from €7 Million to €9.8 Million. The stock graph below, shows that the stock has almost been tripled from €0.5  to €1.5 level.  That suggests, that despite this tough period, stock performance has been more impressive than financials’ improvement.

For one more time, we come across to the same phenomenon like in Kyriakidis (KYRM) (greek post here) or Linkedin, but from the other side. A stock is remaining undervalued for years, when suddenly skyrockets in months or days, giving great over-performance to the serious Value Investor. The graph is presented as a lesson to the investor, that he should ignore to look it during his analysis. Profits will come irregularly as a phenotype when genotype exists. If DNA is the best method of identification, Fundamentals are the most reliable stock selection method. Let’s see what applies to Thrace Plastics.

Beyond attractive valuation and growth, the largest percentage of Sales comes from abroad; a shield against country’s risk. In some respects, a possible GREXIT would favor extroverted companies; especially in the case of a smooth rather than a chaotic transition.

Profit making years that have positive Operating Cash Flaws, allow investments and show how confident and economically robust the Thracian company is.

Apart from the country risk, namely a destructive shock for Greece, investors fear the low margins of the company. Changes in selling price or the cost of production could severely affect profit. On the bright side, margins can go up instead of going down.

A few days ago, a post called, “2-Speed Stocks for Long-Short exploiting“, was pubished in the greek site here. In few words, Large Caps are on foreign investor’s radars. Hence, they have lofty valuations, instead of Small Caps which trade under degrading prices.

Thrace Plastics is a unique case,  as it is not a very small company; this is the reason that the title of the article contains “large“. It has a size just under the threshold of being increasingly watched by foreign investors and funds. That gives the opportunity of being bought as an “undervalued” stock. The “extroverted” characteristic is the icing on the cake of Thrace Plastics, appearing in Athens Stock Exchange’s “showcase”. Tasting it or not, is your decision…

*the article was translated in 19 May, 2017, for the English version of Investorblog. The greek language original was published in 14 June, 2016.