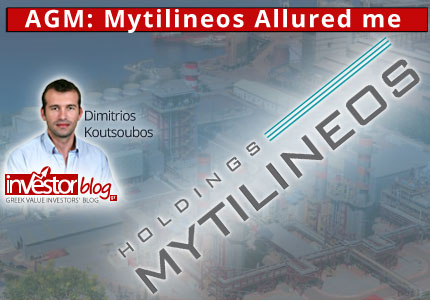 Willing to hire an employee, you may concentrate in his CV. However, even if being reliable, a piece of paper will not always show temperament, aura, character or trustworthiness. Nor an interview can ensure that what you see is what really is. Βut, in this case the whole picture will be better comprehended and you will probably avoid pitfalls. If election is the celebration of democracy, AGM is the celebration of shareholders.

As for Mytilineos, by first declaring that I am not a corporate government expert, I would say that it was the best AGM I have ever observed. Personally, I do not emphasize in typical things, but Ι see what the management or the basic shareholder transpire. Everyone of us, set his own criteria and comes to his own conclusion. I really, appreciate when a company is very revealing about the picture and the prospects with no fear for committing negatives or any dangers ahead. On the contrary, I find it repulsive when companies present a magical picture, or when they put shareholders across. Without saying more details, Mytilineos left me with the best impression. 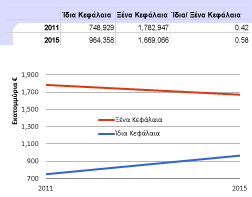 Beyond the above, AGM was the cause to discover this.  During Greek Elections of 2012, Athens Stock Exchange was very depressed, so I was seeking for bargains, especially extroverted companies. I then turned down extroverted Mytilineos, thinking that Liabilities were high compared to Equity and that the company was highly indebted. I prefered to chose more durable companies. Then, during the previous 4 years I was not seriously seeking for new opportunities. All greek Large Cap stocks, excluding Banks, have been trading in high prices. In this context, I had not re-checked Mytilineos’s, and I had stayed with the impression of the high debt. I was surpised when I looked the 2015 Annual Report at the AGM. After the profit making years, the Group Balance Sheet was more robust, compared to what I had seen before 4 years. A large portion of the debt had been re-payed, reducing Liabilities, and Earnings had raised Equity value.

According the new data, the current Market Cap of €493 Million seems to be very attractive. Of course, there is some risk, as commodities and metals are low priced. Fear for survival is raising in Enterprises operating in cyclical sectors, when their product’s prices are low and they make losses. On the other hand, if they stand the crisis, restoration of higher product prices and earnings is just a matter of time. It makes no sense to evaluate them thinking of their current profitability, when they are at the bottom of the cycle. We should count the prospects of earnings in normal conditions, just discounting the risk of their non survival. An asset of the company is its low production cost, making it competitive and durable, and raising the possibility of survival.

AGM was an occasion for me to be allured by the company. On the one hand,  I realized that I had misunderstood how large the Equity/Liabilities ratio currently was. By the other hand it was the best AGM I have ever been.

*the article was translated in 18 May, 2017, for the English version of Investorblog. The greek language original was published in 27 May, 2016.

2 comments on “AGM: Mytilineos Allured me”