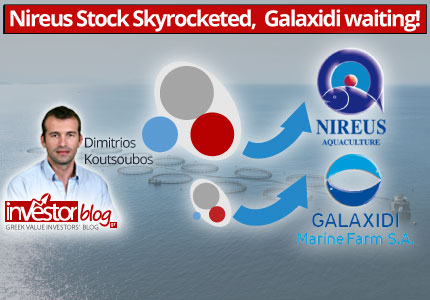 Aquaculture is a special sector for the greek stock market. It is one of the few remaining productive and extroverted sectors, but having a lot of troubles and aggressive characteristics, as reflected in stock valuation and volatility. 2015 was critical due to the recapitalization of those companies’ debt coinciding with price recovery of their product. Nireus’s stock (NIR), followed by Selonda (SELO), have rallied in the last few days. On the contrary, Galaxidi Aquaculture (GALAX), despite avoiding a recapitalization, has lost half of its value. This phenomenon should draw the attention of a Value Investor.

In 2013, I posted, “Nireus: A Stock for Brave Investors“. I liked the stock as an aggressive pick, in spite of the fact that it was above 40c. At the end, sea bream and sea bass price recovery came too late. Dilution was ahead and the price dropped at 20c.

Nireus’s stock dropping, as a Capital Raise and a dilution was probably ahead… (Source: FT.com)

It was the time for me to accept the defeat. So, in 2014 I posted back, “Dilution: Will it Hurt Aquaculture’s Investors?“. I admitted that the most positive scenario was gone, but with the stock possibly saving some value. A small excerpt follows:

The fact that Nireus will finally need a recapitalization is a bad evolution in the sense that it cancels any astonishing return expectations for the brave investors. A capital raise tempers any undervaluation. However, in this case, dilution wont exterminate value. Nothing is for sure, but maybe shareholder’s losses may end here. The necessary condition is no new Net Losses.

After recapitalization, banks are running the company, but luckily shareholders didn’t lose everything –  capital raising at €0.30 per share. Old shareholders kept an 25% of the recapitalized Nireus. However, the stock remained under 10c during 2015 due to the country’s bad economic mood. In August, stock closed in 6.6c, for a Market Capitalization of €5.5 Million. For comparison, Group’s Annual Revenue is about €200 Million.

This is why I included Nireus, Selonda and Galaxidi in my aggressive picks at, “Politics & Greek Stock Market 2016“. Since then, Selonda and Nireus have skyrocketed.

While the two largest greek aquaculture stocks have participated in the “party”, small Galaxidi has declined 50%, in the last 12 months.

Stocks of Galaxidi (in red) & Nireus (in blue) during the last 12 Months (Source: FT.com) 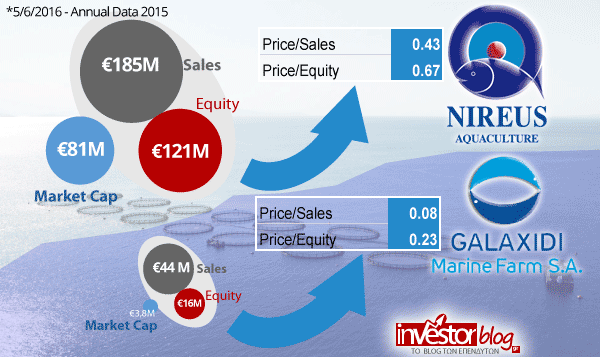 In Global stock markets, most companies’ P/Sales exceeds 1. Despite Nireus’s stock skyrocketing, P/Sales comes in at 0.43, dragged by country risk, and any relapse fears for the company, as it was recently recapitalized. Furthermore, fish prices will not stay at top levels for ever . The same way we had expected a rebound

in prices, now we live in the fat cow period that, sooner or later, will end. It would not surprise me to see a further increase in Nireus stock, but I would consider to fully or partially taking of profits. Notably, by thinking that other stocks are more safe and cheap.

On the contrary, Galaxidi has drown my attention, despite the fact that small companies are risky and their stocks have low volume. Nireus stock has skyrocketed, Galaxidi waiting! Estimating the future is up to you!

*This is a translation of the greek language original that was published in 14 June, 2016.