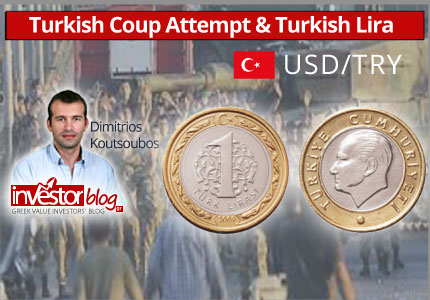 (A translation from the original published in July 26th, 2016)

15th of July will be marked as a historic day for Turkey. It is not the first time that the neighboring country is experiencing a coup, but for several reasons the last coup attempt was not like the previous. Such events change the course of history and of course can’t leave the economy unaffected. So, they may bring opportunities that investors can take advantage of. The geographical and cultural proximity of Turkey help us, the Greek investors, have a better understanding of the situation. We are neither too far, nor inside the fire to lose our objectiveness. As I explain below, I believe that Turkish Lira and USD/TRY exchange rate can be a very interesting field for investors with mid and long term horizon. 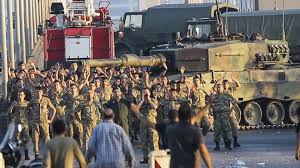 The first question is the assessment of the situation. The failed coup attempt was bloody and happened during the leadership of the Islamic Party. In past, military intervention was more expected. It was a tradition the military to protect secularism, as established by the founder of modern Turkey, Kemal Ataturk. The popular Erdogan was the first to challenge this role, initially by presenting himself as a moderate Islamist. By promising the vision of a modern, tolerate and democratic muslim country, as a model for the rest muslim world, he received the necessary support from the US & EU, and the acceptance from the western-friendly elite inside the country. 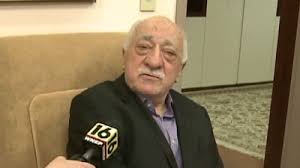 The self-exiled in America Gülen

His great achievements in the economy strengthened his popularity and made him survive the trickles of the generals, until he could set them aside in a more and more visible way.  His arrogance, or according to others the perfect implementation of his cunning plan, brought him to seek the role of the new “Sultan”, without hesitating to chase his older allies, as Gülen.

There are a lot of scenarios. Even conspiratorial approaches exist, that the amateurish coup execution was just a good planned provocation. I don’t find those serious, but I think that the backstage should be interesting. Maybe Edogan knew, but let it exposed. Or he might negotiated the renouncement of the plotters, promising some exchange. Irrespective of any conspiracy theories, on the surface, it seems that the coup attempt favors Erdogan, giving him the alibi to act in a authoritative way. On the other hand, it makes Turkey’s governance, external policy and economy more difficult and increases the risk his becoming a target of a new coup. First, because he will have given his alibi to his rivals, that he is abolishing democracy. Second, because his harsh actions will have a bad effect in the economy and people’s trust. Many will re-thing the dilemma, ” Sultan or Tanks“.

Is it feasible to accurately predict what will happen, when what has happened is not clear yet. Division or “Iranization” of Turkey would be some of the worst outcomes, with severe consequences. In that case, a worthless Turkish Lira the least to happen. However those fears have been expressed for decades.  If they are to come true, probably many years should pass. So, they are not enough to give the signal to the investor to go against the Turkish currency. On the contrary, what encourages the thought of taking action against lira, is the fact that there is no way out with no trouble for Turkey. If this faith gets established, may accelerate a crisis in the economy and the currency.

The atrocities against the putschers reveal the instability that Turkey enters. 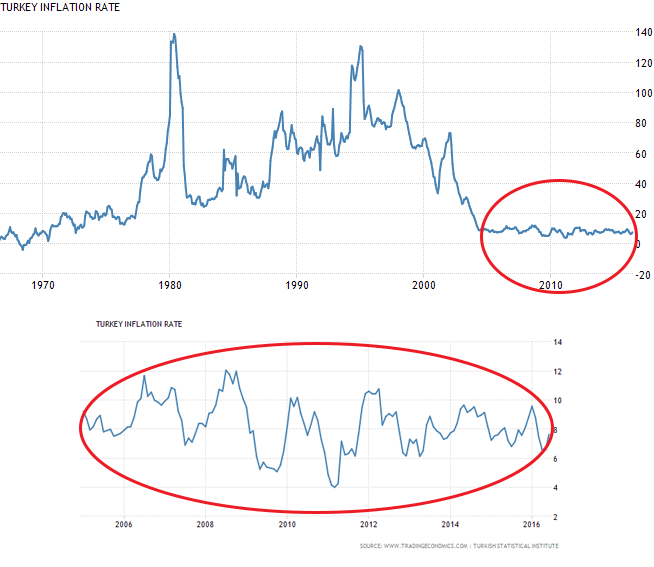 After 70’s Turkey experienced hyperinflation. Erdogan managed to control it. So, during the last decade price index is increasing with a sensible rate of 8% 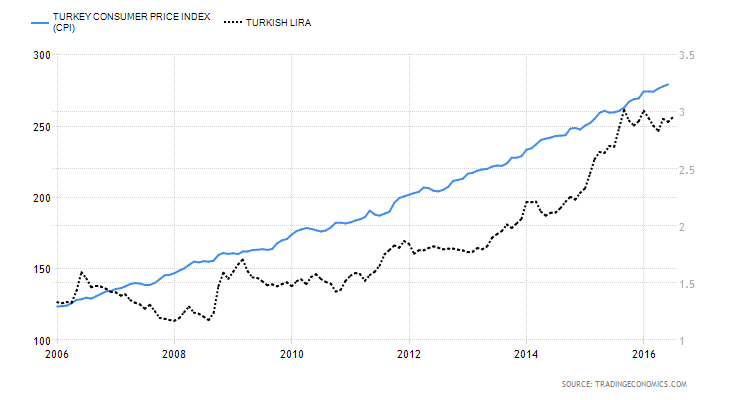 Inflation is affected by many other parameters, such as economic growth, but basically it is mirroring the devaluation rate of the currency. The graph above shows that both the price index and the exchange rate of lira compared to a stable currency like US dollar, have been doubled.

The next graph shows Turkey’s current account deficit. This means that the country spends more on imports of goods and services, compared to its exports. It is an indication of an “expensive” currency and consists a force that push the currency to devaluate until competitiveness of domestic production restores.

You can see that the relatively stable currency before 2013 and the rising deficit after 2012 made the exchange rate not viable. So, the necessary devaluation that started in 2013 brought the deficit to more reasonable levels. The big issue for Turkey is that the viability of the current account deficit is related to the continuation of the strong foreign investment, that might get hit after the coup attempt. 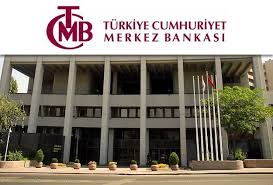 The role of the Central Bank is important, because through tools, such as interest rates, it can implement the monetary policy, and  determine that way the fate of the currency and inflation. Obviously, in 2013, it arranged the devaluation of the currency (point 1) by lowering the interest rate, and thus helping the current account balance, as mentioned earlier. However, the intense pressure in lira and the fear of loss of confidence to the currency brought the instant doubling of the interest rate (point 2). This move provoked reaction from furious Erdogan. Anyway, the intervention of the Central Bank was able not only to stop the slipping lira, but also to initially appreciate it. 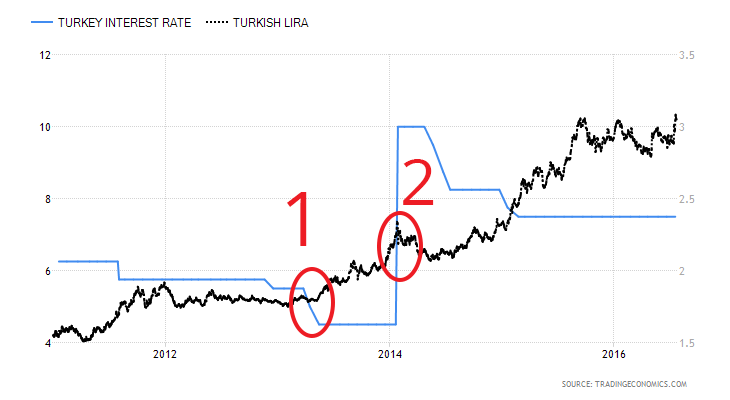 The war between CBT and Erdogan is well known. On April 19th the central banker Erdem Başçı was replaced after the end of his term, by Murat Çetinkaya who is believed to follow a looser monetary policy, obeying political guidance. This is not an advantage for lira.

One more disadvantage is the foreign exchange reserves of the central bank. They are not high enough to allow the country to support the currency by burning them through.

What can help lira are the high growth rates and the low sovereign debt compared to GDP. Nevertheless, if trust is lost GDP growth could turn negative and servicing of debt could face difficulties. 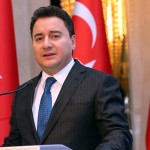 The architect of the Turkish economic miracle.

I am very negative towards the Turkish currency, since I believe that all the factors that created the Turkish economic miracle are questioned. Populism is returning and Turkey is moving to the opposite direction of the pragmatist policy that Ali Babacan established. If geopolitical friction with EU, US and the domestic instability increase, unpopulist measures will be the last Erdogan will think of. On the contrary, he will want to give everything to people. Romania’s Ceaușescu was promising raises and benefits in his last speech, just before his dismissal and death. 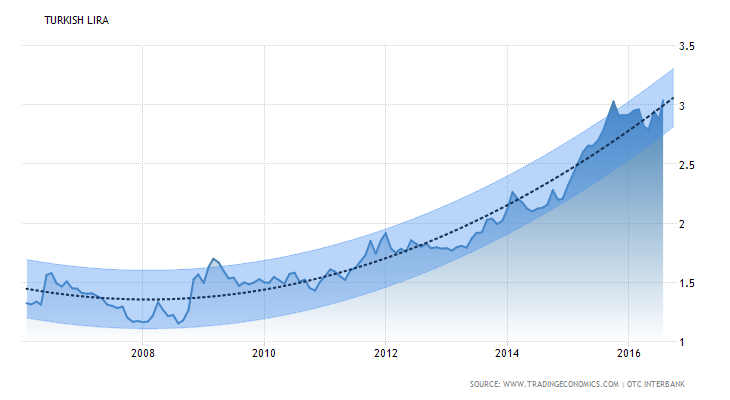 A country with hyperinflation history is dangerous to follow this path in this unstable environment. Even if no disaster comes, I believe that lira will have to slip to lower levels during the next 12 months. In addition, I can not see any factors that could bring an appreciation in the long-term. A thought is to be long in USD/TRY, currently at 3.04 and increase the position if lira sees a short-term appreciation below 3 USD/TRY.

Despite the fact that I have been watching long term movements of currencies for academic interest, I have never felt the certainty to initiate a position. The Turkish Lira and USD/TRY rate offer the “margin of safety”, for me to try currencies for the first time, both in terms of article writing and investing. Even though I don’t rely on luck, please wish me the beginner’s luck! 🙂

Tags: coup, coup attempt, devaluation, Erdogan, exchange rate, inflation, TRY, Turkey, Turkish Lira, USD/TRY
← Equities: The Power of Predicting What, Ignoring When
Will I outperform the UK stock market, as I did in Greece? →