OPAP: Better Off Without such a Dividend… 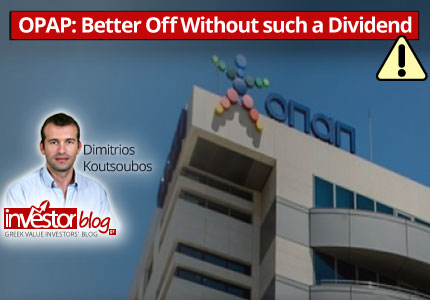 OPAP (OPAP:ATH) announced the distribution of €0.60 per share, the rest of its Annual Dividend. By adding a €0.12 that has already been distributed and the special dividend of €0.57, the total goes to €1.29 per share. Investors have positively reacted sending the stock above €9. There are a lot of references about the importance and the value of dividends in Investorblog, like lately by Miltiadis here (in Greek). Generally, I agree with this reasoning, but we have always the exception that confirms the rule. Dividend of OPAP is such an exception. Namely, I have a negative opinion for such a large dividend. 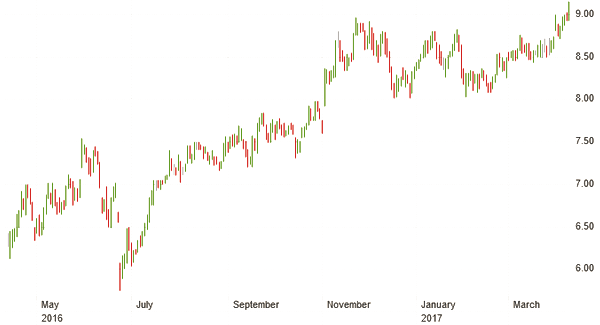 Dividend is the part of profits that are distributed. The rest stays to the company, increasing its Equity. The Distribution alone does not generate any value, because anything distributed is subtracted from company’s value. Namely, Net Income is what generates value, regardless of being distributed or not. Naturally, we highly weight a dividend, especially for minority shareholders, as it shows the practical ability and the will of a company to generate and drive cash flows towards them.

Everything is relevant. That is to say, if the company is able to efficiently invest its new, through Net Income generated capital, it ‘d be rather not to distribute it (low payout ratio). In this case, the Div Yield goes down, but the total performance goes up through the reinvestment and company’s growth.

Similarly, if the distributed part exceeds the company’s ability (a higher than 100% payout ratio), Div Yield goes up, but it leads to equity hemorrhaging. As a result, total performance ends up lower than what the bold dividend shows. Again, a smaller dividend would be better for the company, in order not to end like Frigoglass (FRIGO:ATH). The emblematic group’s collapse, is related to this equity “hemorrhaging”. 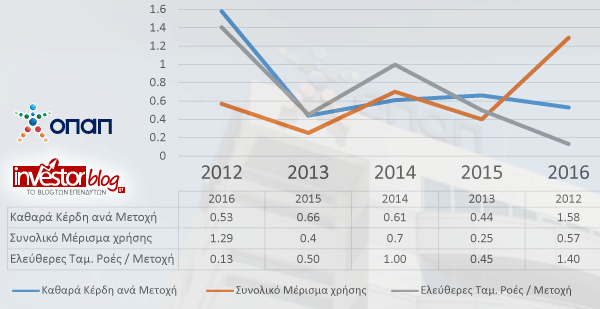 The graph above shows Net Income,  Free Cash Flows and Dividends per share during the previous few years. We see that, Net Income and Free Cash Flows are less than Dividends. That way, OPAP having had €463 Million Cash in 2012,  it is now left with €271 Million only, in 2016 end. On the contrary, Debt has increased from €251 Million to €382 Million, for the same period. Now, Debt exceeds Cash. This relation will get worse after the last dividend distribution of €0.60 or €190 Million to by paid in May and the €100 Million bond issue. The graph below shows Debt and Cash evolution. Note that it does not contain the €0.60 dividend and the bond effect. 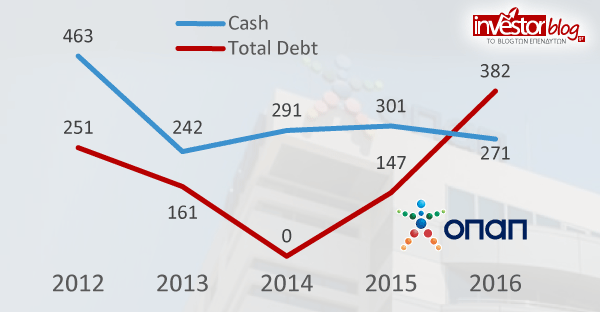 The situation is under control for the moment. However, if the current practice is to be continued and if the company’s fundamentals won’t improve, then danger will be ahead. Now, OPAP is issuing debt partly to service its distributions towards shareholders.

Focusing on dividend, the trees do not let us see the forest. In my view, those below are the reasons that long-term shareholders should be concerned for. Not the dividend.

Changes in taxation and regulation may determine the company’s future, more than anything else. Past is an example. Despite gamble being resistant in Greece of crisis, OPAP’s profitability is 1/3 of what it used to be in past.

The €150-200 Million OPAP’s profit range is a result of a taxation imposed on Gross Gaming Revenue (GGR). Initially a 30% was imposed on GGR, but then it was increased to 35% in 2016. Consider that when such a tax was not present, profits used to exceed €500 Million. Those years, a €1.5 per share dividend was feasible without stressing Balance Sheet. Now, it is not.

In this context, it makes no sense to try an one-sided projection about gamble future. Of course VLT’s can be game changing. Maybe it is the only other critical factor, after taxation. But again VLT’s future depends on regulation. Thus, shareholders must understand the importance of taxation and regulation. Finally, its the country’s fate that can define OPAP’s future. Especially in case of an accident.

In the scenario of a stable taxation and normality in Greece, I find the price of the stock at €9.11 as demanding at a Market Capitalization of €2.9 Billion. If I compared it with other greek stocks, I would characterize it as lofty. A good scenario in VLT’s combined with an exit from the greek crisis, would make the current valuation interesting. However, it would not make the stock a bargain, in my view.

A tax reduction would really skyrocket the stock, while a tax increase would crash it. A hypothetical Net Income of €600 Million, like before GDR taxation was imposed, would lead the stock to €18.8 or €6 Billion Market Cap, for a P/E = 10.

In this context, the dividend comes second, even if it entices the investor, leading him to the illusion of a high yield. The danger signal of my investing instinct has started ringing after the company’s practice to focus on the “appearance”, during this critical period.

I would like to add that I was thought to be crazy when I was criticizing its acquisitions and the verbalistic tone of its announcements in 2008-2009. When people were enchanted by the Arabs and the huge Capital Raise, Investorblog was contrarian then (post of 2017, in Greek). It would be interesting for you to travel in the past and see what were the forecasts and the expectations then. To be fair, OPAP does not follow MIG’s style, staying neutral. But, it “washes its hands” for attracting investors. But the “menu” is accompanied by excessive distributions partially based on debt to gild the pill of profit’s reduction.

Non professionals, think that strong distributions are to be continued. But, this can’t be, without net income increasing in some way. All this, scares me. In addition, I am scared of the headlines focusing on large dividend yield, and the great EBITDA or Cash Flows. What about the prepaid VLT’s licence for €560 Million? Isn’t it a cost? What about its renewal? Analyses that talk about target prices of above €9 per share, are based in plus €400 Million EBITDA, plus €200 Million Net Income. They estimate Wagers to increase from €4 Billion to €10 Billion, when already gamble market in Greece exceeds 1% of GDP, one of the largest in Europe.

Speculators who don’t care about a long-term holding of the stock, can indeed get benefited from the high dividend yield, boosting the stock despite debt accumulation. The Balance sheet is still robust, and those bad, in my view, practices of aggressive distributions may continue for some years

Having a long term horizon, I would overcome my fears, only by betting on VLT’s success, and if I saw the stock price 20% lower than today, at €7.3 per share. Namely a P/E = 10 for a €60 Million improvement in profitability.

As for the astonishing dividend yield, I ‘d be better off without it…

*This is a translation of the greek language original that was published in April 10th, 2017.